It’s the 13th October and I’ve had a horrible realisation that if I’m selling Christmas cakes, I should be baking them now! This is a problem because I have no idea how many Christmas cakes I may sell. The optimist in me says make 10, and enjoy any leftovers (or use as handy raffle prizes), the pessimist says make a couple because who really likes fruit cake anyway? I am very excited however about decorating my first, properly matured fruit cake which has been gently bathed in brandy weekly since early August which means it’s probably absolutely gorgeous but shouldn’t be consumed anywhere near naked flames… I saw a beautiful Scandinavian themed dessert table at the Cake & Bake show in London recently and am planning a simple red and white folk-art decoration, inspired by it (here’s some more of Tempting Cake’s Tempting Tables).

I’ve never been much of a summer cook, all my culinary skills seem to decrease in inverse proportion to the outside temperature. But I’m an autumn baby and with the turning leaves and chilly evenings comes an overwhelming urge to fill the house with warming, spicy, comforting smells and flavours.

I’m doing my first fair on Tuesday and have been baking non-stop for the past couple of days. Alongside basic vanilla cupcakes, I’m taking sticky toffee cupcakes with a wicked hidden dollop of dulce de leche in the centre, vanilla lolly biscuits decorated as pumpkins and my trusty faithfuls, a lemon sponge with lemon curd and zesty buttercream and a traditonal(ish) vanilla sponge with raspberry jam and vanilla buttercream. I’m also learning to ask – I have lovely friends who know me really well, and take notice of what I bake – so I asked what I should be making to sell.  I’d completely forgotten about the cookies on sticks which I did as a party favour for my middle daughter’s birthday, but they make great after-school treats and are easily themed and very portable (and easier to eat in a car on the way home from school without smearing buttercream everywhere!) A year ago I also made some pumpkin whoopie pies, using a Hummingbird Bakery recipe which a friend raved about,  I wouldn’t have thought of then but she mentioned it when I was talking about the fair and I revisited the recipe. I hate the taste of bicarbonate of soda in cakes and always felt it came through strongly in that particular recipe but the rich pumpkin colour and gentle warmth from the spices do make a fabulous autumn treat.  So, I adapted it slightly and the result was much better and of course it also gave a chance to try out the whoopie pie tin I bought at the Cake & Bake show which gave even and much easier to sandwich together pies! I also find that the pumpkin puree I use (which is the only one I can find in Waitrose and Ocado – Libby’s Solid Pack Pumpkin) is very stiff and results in dollop-y pies rather than smooth domes so I’ve diluted it a bit, resulting in light, gently domed pies.


For the sponge
120ml sunflower oil 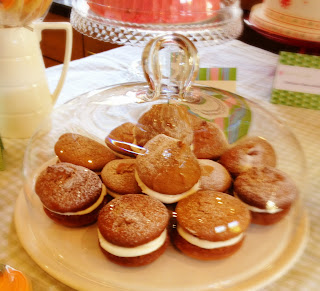 Unfortunately due to the current lockdown, we are not producing any cakes. Our supplies come through normal consumer channels and with flour and eggs in short supply, we feel it best to ensure there’s enough to go round. We are still discussing wedding cakes for later in the year and have availability for autumn and winter dates.

We use cookies to ensure that we give you the best experience on our website. If you continue to use this site we will assume that you are happy with it.Ok